TECHNOLOGY
Facebook is launching official music videos in the US

Facebook is taking another stab at stealing some video viewing hours from YouTube by launching official music videos in the US.

Starting this weekend, users will be able to watch videos from some of their favorite artists across genres. For that, the company has patterned with some major record labels including Sony Music, Universal Music Group, Warner Music Group, Merlin, BMG, Kobalt, as well as many across the independent music community, and publishers.

Facebook had already tested out official music videos in India and Thailand through partnerships with local labels. Those partnerships also helped the platform with music for certain Facebook and Instagram features.

Earlier this month, the social network sent notifications to page managers of artists regarding this upcoming feature. Before this launch, Facebook could only show clips of music videos to users.

While the videos will be available on artists‘ pages and will appear on your newsfeed, the company is also introducing a dedicated music tab in the Watch section. This tab currently doesn’t exist in India. 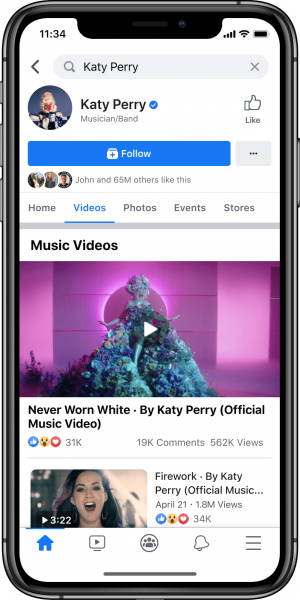 Facebook said that it’s going to release exclusive content from artists such as J. Balvin, Karol G, Sebastian Yatra, Alejandro Fernandez, and Calibre 50 in the coming weeks. Plus, the company’s releasing videos from some noted artists including Anitta, Blake Shelton, Bob Marley, Diplo, and Miley Cyrus at the start.

It will be interesting to see how Facebook’s move pans out. A few people might continuously go to their favorite artist‘s page to check out newly released music videos — in case they knew the release date. Otherwise, it would be cool to see a new song by artists I like pop up on my news feed.

On YouTube, a lot of times, I would play one song and let autoplay take control over the next few songs. If I like a tune, I’d mark it or subscribe to the channel. We’ll have to wait and see how Facebook’s recommendation engine works and if it can expand your musical palate.