Rocket Lab is known for launching tiny satellites into Earth orbit, but the company has big plans to venture deeper into space, with its first mission to the Moon set for next year. Thanks to a contract with NASA, Rocket Lab will send a small spacecraft called CAPSTONE into orbit around the Moon to test out how to navigate in lunar orbit and help human missions to the Moon in the future.

It’ll be the most ambitious mission yet for Rocket Lab, which just launched its workhorse Electron rocket on its 12th flight this weekend. In total, the company has put up to 53 spacecraft into space, and so far, all of the those launches have sent satellites into low Earth orbit. But the company has been eyeing ways to push the envelope. “From day one that I came to Rocket Lab, it’s been an interest to stretch the legs of Electron and keep pushing to see what we can do,” Amanda Stiles, the Moon program manager for Rocket Lab who used to be the director for Google Lunar X Prize, tells The Verge. “And I know from the very highest levels of the company, there’s always been a big interest in going to the Moon.”

This mission will rely on a key piece of hardware that Rocket Lab has been using for the last few years: its Photon spacecraft. The cylindrical vehicle sits on the top of Rocket Lab’s Electron rocket, propelling customers’ hardware into low Earth orbit. It can also serve as a customizable satellite that can carry various payloads and instruments into space. “For most people’s purposes, they’re looking at low Earth orbit, but it’s also flexible where we can upgrade it and use it as a platform for these more advanced missions,” says Stiles. “So, this is the first advanced version of a Photon for that purpose.”

For the CAPSTONE mission, Rocket Lab has added some upgrades to Photon, most notably bigger propellant tanks and a new engine that the company is developing called the HyperCurie. It’s a version of the 3D-printed Curie engine that Rocket Lab already uses, but it’s being slightly altered to get some more thrust. Rocket Lab also plans to upgrade some of the systems on Photon, as well as add solar panels, so that the vehicle can last a bit longer in space.

Photon is going to need it all in order to get NASA’s CAPSTONE into the Moon’s orbit. After launching from Rocket Lab’s new launch site in Virginia, Electron will first deploy the Photon spacecraft — with the CAPSTONE satellite mounted on top — into a low circular orbit around Earth. From there, Photon will slowly stretch its orbit, taking the vehicle farther away from the planet. Eventually, Photon will burn its HyperCurie engine and set it on a course toward the Moon. All in all, it’ll take about eight to nine days to reach the right spot where Photon will deploy the CAPSTONE spacecraft, and Stiles says the route they’re taking will save Rocket Lab some energy along the way. “That’s a pretty key enabler for the mission,” says Stiles. 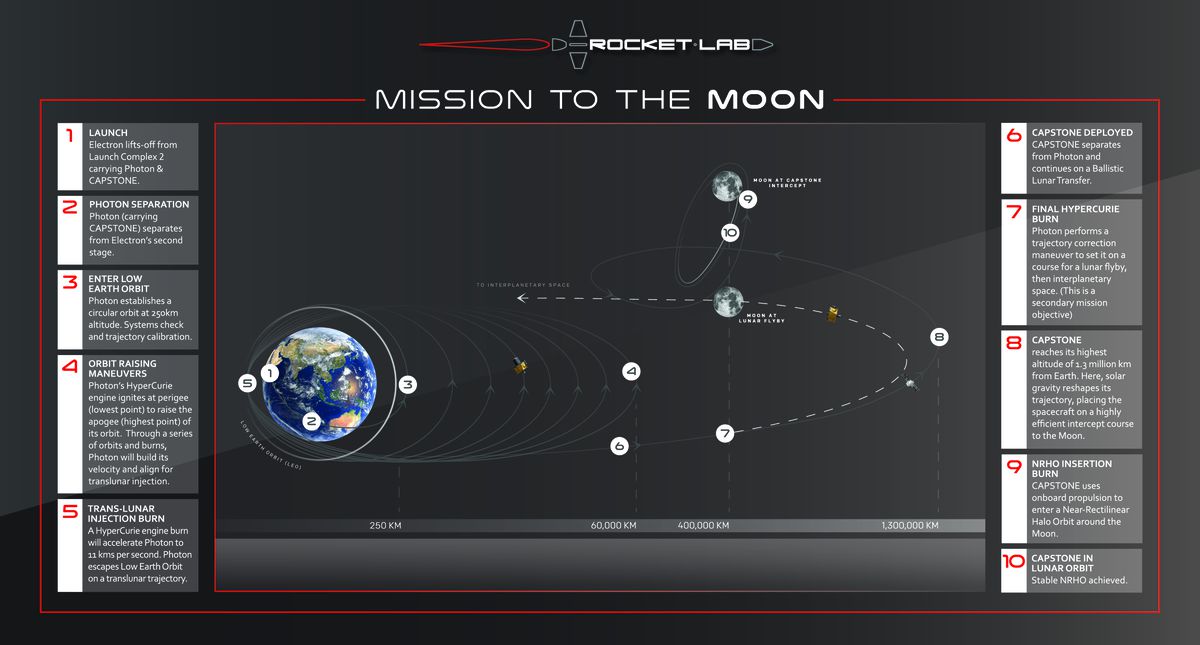 Once at the Moon, CAPSTONE will attempt to insert itself into lunar orbit, testing out navigation and control technologies that may be critical for the future. CAPSTONE is targeting a particular type of orbit around the Moon, known as near rectilinear halo orbit. This orbit will take CAPSTONE within 1,000 miles of the lunar surface and out as far as 43,500 miles. It’s also the same orbit where NASA plans to build a new lunar outpost called the Gateway. This distant space station will eventually serve as a waypoint for astronauts, where they can live and train for brief periods before descending to the surface of the Moon. The data CAPSTONE collects will hopefully help NASA gain a better understanding of how to navigate in this orbit in the future.

As for the Photon spacecraft, it may have more to do once the CAPSTONE satellite detaches from the vehicle. Stiles says Rocket Lab is considering an extended mission with the vehicle, potentially sending it out into interplanetary space to demonstrate Photon’s capabilities for future missions. “We haven’t settled on a final decision on that yet, but it’s something we’re definitely looking into,” Stiles says. “But the primary mission is really the focus.”

The CAPSTONE mission could help pave the way for Rocket Lab missions that go into deeper space. “We’re looking at not just the Moon but Venus and Mars,” Stiles says. “Once we figure out the platform to get ourselves to the Moon, then that really opens up the possibilities of going to a whole bunch of places.” It’s not just Rocket Lab that’s interested in sending small probes into deep space. Satellite launcher Virgin Orbit has also announced plans to send tiny spacecraft to Mars, once its LauncherOne rocket is up and running.

There’s some precedent for sending tiny spacecraft out to distant worlds. NASA sent two small standardized satellites — known as CubeSats — out to Mars along with the agency’s InSight lander in 2018. The tiny tagalong vehicles served as relays, helping NASA get updates on InSight’s landing sequence in real time. The pioneering space probes proved that small satellites could be useful on these larger interplanetary missions as helpers, observers, or communicators. Or they could be used as pathfinders, like CAPSTONE, testing out technologies that future, much larger spacecraft will need to master when exploring other worlds.

Ultimately, Stiles says there are a ton of opportunities for sending small spacecraft into deep space, and people are just starting to fully understand what these tiny vehicles, launched on small rockets, can do. “I think maybe it didn’t even occur to a lot of folks,” Stiles says. “Whenever that happens, you start getting all kinds of new ideas and new missions that five years ago nobody even thought about.”